Producer, Audio Engineer, and multi-instrumentalist, Charlie Guidry, has over a decade of experience making records and writing music. The majority of his contributions can be found behind the curtain as the master sound and audio engineer for a variety of music releases. Under the moniker HIPPO, his productions lay testament to a sophisticated and timeless music catalog in the making. 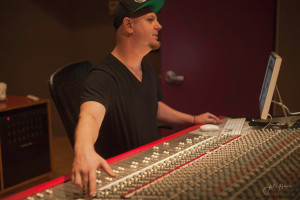 This obsession started when he was a kid, about the age of 7. He used to put his black tape recorder, the one with the red record button in the middle of the play button, up to the huge black tuck and pleat vinyl stereo speakers his parents had in their house to try to capture the sound coming out. It wasn’t uncommon for his folks to find him sitting in the den with his dad’s head phone’s on, listening to his rock records, and eating mustard out the jar with a spoon. As he got older, his obsession kept growing. He became fascinated by sounds and music.

By 12, he was on his way to being an accomplished guitarist – performing in a variety of heavy metal and southern rock bands in his home town of Lake Charles, Louisiana. By 18, a 4-track and MC303 would spark his 20+ year obsession with analog – and later digital – audio production and recording techniques. By his mid-twenties, this journey would land him in Austin, TX working as a sound engineer and lab tech at Mediatech Institute and Willie Nelson’s infamous Arlyn Studios. Through his audio engineering and live sound career, Guidry has worked along-side artists such as The Roots, The Wailers, Robert Plant, and Medeski, Martin & Wood, Los Lonely Boys, Gov’T Mule, Dead End Lake and provided audio services for Electronic artists like Bassnectar, Kraddy, Figure, MartyParty and The Alpha Rhythm.

As HIPPO, decades behind the board culminate into a definitive and precise moment where the past propels a new era of original sound. Looking for the perfect rhythms to induce the proper state of bliss and trying to express thoughts and feelings as he grows as a person and artist.